NOTES: Encoder receiver transmitter (ERT) is a trademark of Itron, Inc.The information below is based upon Grid Insight’s independent research. It is offered here without warranty.

Itron’s encoder receiver transmitter (ERT) technology was originally developed in Minneapolis by Itron’s predecessor company, EnScan. At the time, it was revolutionary in the utility industry in that it allowed human walk-by meter readers to be replaced by a human driving an automobile equipped with a special computer and radio receiver capable of receiving each meter’s consumption data through a simple digital radio protocol.

This general technique has come to be known as automated meter reading, or AMR, and has been mimicked by competitors who have implemented similar, but incompatible, protocols.

First generation ERTs required a wake-up tone in order to initiate transmission. The utility’s AMR vehicle would drive through an area constantly transmitting this wake-up signal. When the receiver in each ERT detected the signal, it would send out its own data for a period of time, during which the AMR receiver would pick it up before moving on to another area.

Most ERT devices can be configured to transmit in what Itron calls “bubble-up” mode. In this mode, no wake-up tone is required. The device simply transmits its consumption data every few seconds. All recently-manufactured ERT transmitters tested by Grid Insight and by our beta testers have been observed to operate in bubble-up mode. Itron’s data sheets seem to confirm that bubble-up mode is now either the default setting or the only available option on new ERT units.

Some ERTs manufactured after Itron’s first generation series 40 and 41 units transmit an optional interval data message (IDM) in addition to (or instead of) the standard consumption message (SCM) the earliest models had used. Our field tests have shown that some series 45 and newer Centron C1SR electric meter ERTs in the utility areas visited transmit this much larger interval data message. The IDM format, rather than reporting the meter register reading in real time, instead reports the meter’s interval consumption (the change in register value) for a series of 47 time intervals. The current total meter reading is included, but is valid as of the close of the last interval (for which an offset is provided). The interval period has been observed to be either five or ten minutes, depending on the version of the IDM format used. Thus, each interval data message contains consumption data spanning either four or eight hours. To build a complete data set from these messages (some caveats aside), transmissions need only be received from each meter a few times a day.

It seems that little changed in ERT technology as meters transitioned from electromechanical (with the spinning metal disc) to wholely solid-state in the early 2000s. Itron phased out manufacturing of the series 45 add-on modules and began focusing its attention on the its Centron C1S meters. One ERT-equipped version of this model is called the C1SR, and was sold originally under the Schlumberger brand name until Itron completed the acquisition of Schlumberger. Based on field observations, it seems that all C1SR models transmit in “bubble-up” mode, so no wake-up transmission is required to receive signals from Itron and Sclumberger solid-state ERT-equipped meters.

The Centron C1SR has come in a number of versions with a number of ERT data output formats. Some meter types transmit consumption in 1 kWh units, while others use more granular 10 Wh units. 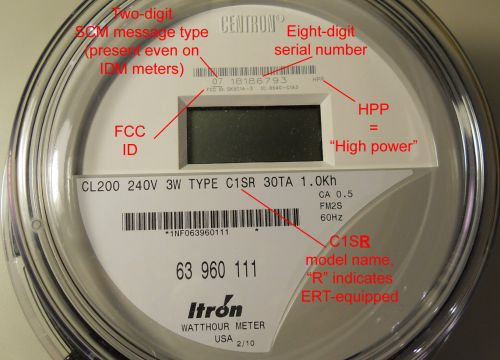 A few years ago, probably to take advantage of some recent changes to FCC regulations, Itron began shipping a version of the Centron C1SR with a higher-power transmitter. This new transmitter significantly increases reception distance at the expense of a reduction in how frequently it sends the data message. Where signals can be received from a low-powered ERT every few seconds (at short range), the high-powered models may only be heard once per minute or more (per our observations).

Fortunately, interval data messages do not need to be received frequently in order to be useful. Because the high-powered C1SR transmits interval data messages, this is not an issue. For the subset of low-powered models that only transmit the shorter SCM messages, and especially those that use 1 kWh units, the low granularity/precision of data can, especially when reception conditions are poor, make it very difficult to assemble a useful real-time load profile.

For that reason, it is important to understand the characteristics of the target meter models. What may work well with one type of meter may work poorly or not at all with another.

That being said, Grid Insight’s field testing and beta users in various cities across the U.S. have had considerable success with in-home monitoring of everything from older series 60 water meter transmitters sending only SCM data, to newer C1SR R300 HP meters sending very solid IDM data.

The above text discussed ERT technology as it applies to electricity (killowatt-hour) meters. The same information, more or less, applies to the ERT technology that is sold and used for natural gas and water metering.